A few days ago, Susun S. Weed offered a free teleconference. I listened in, and was reminded of how much of an inspiration she has been to me. And I realized how in the past few years I have moved away from her philosophy. So I found my old copy of Healing Wise, gifted to me nearly 20 years ago by my mentors Pearl and Joann, and started to (re)read.

The symbol of the heroic tradition is a circle. It has rules and punishments. It uses purging and cleansing. It is foreign and exotic. Alternative health care practitioners usually think in the Heroic tradition: the way of the savior, a circular path of rules, punishment, and purification. “Trust me”. 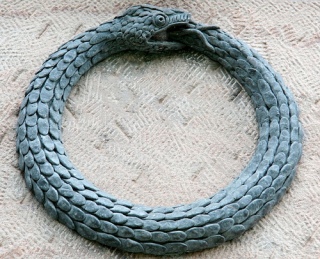 The Scientific, Heroic, and Wise Woman traditions are ways of thinking, not ways of acting. Any practice, any technique, any substance can be used by a practitioner/helper in any of the three traditions. There are, for instance, herbalists and midwives and MDs in each tradition.
The practitioner and the practice are different. The same techniques, the same herbs are seen and used differently by a person thinking in Scientific, Heroic, or Wise Woman ways. Thinking these ways does lead to a preference for certain cures. The Wise Woman helper frequently nourishes with herbs and words. The Heroic savior lays down the law to clean up your act fast. The Scientific technician is most at ease with laboratory tests and repeatable, predictable, reliable drugs. But still, the practices do not conclusively identify the practitioner as being in a particular tradition. The intent, the thought behind the technique points to the tradition: scientific fixing, heroic elimination, or wise womanly digestion and integration.
The three traditions are not limited to the realm of healing. The Scientific, Heroic, and Wise Woman ways of thinking are found in politics, legal systems, religions, psychologies, teaching styles, economics. As the Wise Woman way becomes more clearly identified, it opens the way to an integrated, whole, sacred, peaceful global village, interactive with Gaia, mother, earth. As each discipline spins anew its wise woman thread, we reweave the web of interconnectedness with all beings.
I became a midwife and mother in the wise woman tradition. And then through life experience and fear was led to heroic and scientific traditions. And now I am spiraling back. So this morning I applied to Susun S. Weed’s correspondence course. Which one is right for me?
Read an excerpt from Healing Wise here.
And here is Susun explaining it:
She blows this interviewers heroic mind, don’t you think?

What healing methods do you use? What tradition do they belong to?

4 thoughts on “The Three Traditions of Healing”