This week let’s take an herb walk at Many Hands House, shall we?

Today we’ll take a look at Stinging Nettle, my Spinster Sister.
When she is young, and the leaves are tender, she looks like this: 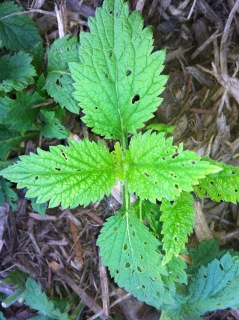 When she is bigger and tougher, she looks like this:

And after you’ve picked her with your bare hands for a while, they will look like this!: 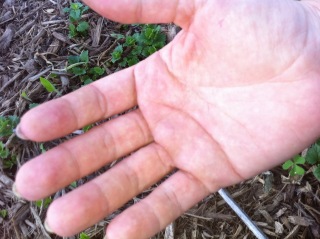 Stinging nettle is rich in pagan folklore. In Norse mythology Thor the God of Thunder is often represented by nettles, and burning them on the fire will protect you from his lightening during thunderstorms. Also in Norse mythology Loki, the trickster God, spun fishing nets out of nettles. Actually a very good string can be made out of nettle fibers, and it was widely used in the ancient world. It was especially used for making “nets”.
In “The Wild Swans” by Hans Christian Anderson, the princess Elissa is guided by the queen of the fairies to gather nettles from graveyards without uttering a word. As she gathers them, she has to tread them with her bare feet; she then knits the nettles up into coats that will rescue her brothers from the swan form bestowed upon them by an evil queen.
The Buddhist saint and yogi, Milarepa, is said to have eaten nothing but nettles and to have turned green as a result; hence, many of his images are constructed from green jade.

Stinging nettle is a nutritive herb, meaning, well, it’s all around good for you! Use the young leaves for tea and in salads. Midwives recommend a tea made from nettle leaf, oatstraw and raspberry leaves for their pregnant friends. Nettle root is a hair and scalp tonic. It supports your thyroid and your urinary tract. Nettle is high in vitamin A, B, C, K, calcium, potassium, iron and many trace minerals.
Yesterday I gathered up young nettle leaves to try making into juice! I ran a large unrinsed bowl of leaves through the juicer and only got a shot glass worth! It smelled so green! And looked so green!
But the taste was, well, overwhelming.  Like a glass full of sting.

Next time I’ll stick to tea.
Here’s Susun showing you how to make it:
Have you found nettle in your yard? What’s your favorite nettle recipe?