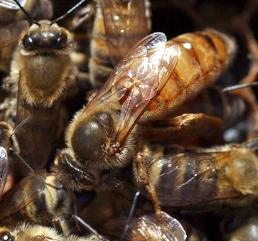 Last week, during Screen-Free Week, we went to Des Moines to pick up our two new hives of bees.  We struggled up the muddy driveway, the rain pouring in sheets on the windshield.  We had arrived at Ebert’s farm. 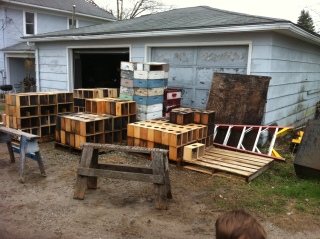 Almost immediately, we had identified the other eccentric clients, waiting for hives themselves, as witches.  They may not have called themselves that, but they obviously served as the “hedge riders” in their respective communities.

Getting the bees settled in their hives was touch-and-go for a while.

A few hours after we had installed the bees, Melanie saw a ball of bees on the ground, about four feet away from the hives.  Upon further inspection, she discovered a queen in the middle of it.  But, which hive was she from?!  We reopened both hives, and Hive 1 was queen-right.  We knew, because the queen was still in her tiny mesh box. 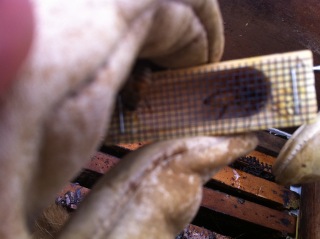 We improvised a new queen container (we couldn’t get her in the old one) from a small glass jar, and some mini-marshmallows, and put her and two attendants back in Hive 2. (The one the queen had been “dropped” in in the video.)  Fingers crossed.

But, the next week, things had seemed to have been going quite smoothly. Today was the best day of all, since we saw the bees really getting down to business:

Chris gave his usual lament: that their should have been songs to be sung, and rites to enact at this holy time.  He then remembered that there was an Anglo-Saxon metric charm still known to us from the ancestors: 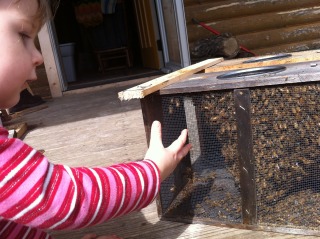 5 thoughts on “Long Live the Queen”