It’s the time of year for digging up roots.  And that’s what I have been doing this week. Mostly yellow dock and dandelion. I was planning to make an iron tincture, but my friend recommended this Iron Syrup recipe from herbalist Aviva Jill Romm:

First I gently cleaned them, then chopped them up finely.
I put the chopped roots into a quart jar.

Then I poured very hot water over them and left them sit over night. 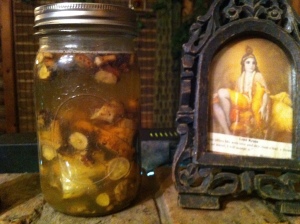 Next, I strained them into a pot and simmered until I was left with 1 cup of liquid infusion. This is called a decoction. 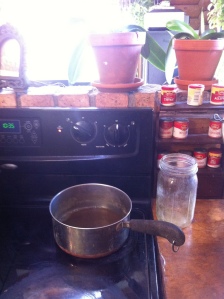 To this I added  the blackstrap molasses while still heating.

As soon as it was mixed, I removed it from the heat. Then I added rum.

It tastes good! I am keeping it in the refrigerator where I hope it will last 3 or 4 months.
I’ve been taking a spoonfull every day, along with a Vitamin C chewable. I love it!
What herbs are you gathering? What have you been creating?